Warning: Use of undefined constant is_single - assumed 'is_single' (this will throw an Error in a future version of PHP) in /home/customer/www/cmsmoving.com/public_html/wp-content/themes/cms-moving/template-parts/content.php on line 13
Posted on October 8, 2016January 23, 2018 by City Moving & Storage 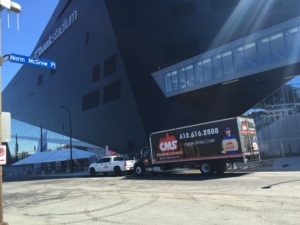 ikings are 4-0. What has contributed to their early success this season? Sam Bradford has looked great replacing the injured Teddy Bridgewater. Xavier Rhodes looks like the next Richard Sherman. The Vikings Defense has been stingy and given the fewest points in the NFL. All of these have been crucial for the Vikings Start. However, at City Moving & Storage we believe something else has played a role…

Last May, we had the privilege to move the Vikings Ticket Office into US Bank Stadium. I, personally, was on that move and I believe the Vikings would not be 4-0 without our efforts. On that hot May day, my crew and I moved over 500 boxes into the new stadium. About 100 boxes were stored in the vault because they were personally addressed to the players. Could you imagine if Xavier Rhodes did not get his package? That could have thrown off his whole game. The Vikings players are under pressure all the time. When they chose us to move their personal belongings, however, they were worry free!

Since Sunday is tomorrow and the whole state is buzzing about football, I thought it would be fun to give my predictions for the games this weekend.

Jets @ Steelers
– Ryan Fitzpatrick has a great game but it is not enough against the steelers.. Steelers WIN 28-24

Eagles @ Lions
– This one turns into an offensive shootout. Stafford or Wentz.. whoever has the ball last.. Lions WIN 32-28

Patriots @ Browns
-Sorry Cleveland.. Tom Brady is back (struggles a little but still no test against Browns) Pats WIN 27-14

Falcons @ Broncos
– Not even the Broncos Defense can slow down Matt Ryan and Julio Jones.. Falcons WIN 28-21

Bengals @ Cowboys
– AJ Green has another big game but Bengals struggle in the redzone.. Bengals WIN 24-21

Giants @ Packers
-Everyone is going to be watching how OBJ responds.. look for him to have a big night but Packers WIN 28-27

Thanks guys.. I will check in on Monday to see how I did